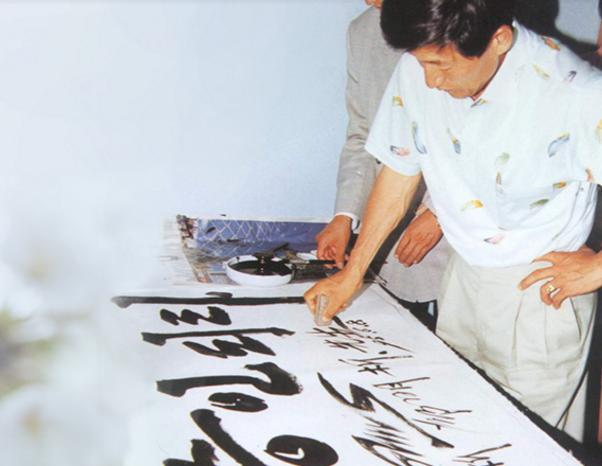 Jung Myung Seok has been active in his artistic activities and exhibits his calligraphy and paintings under his pen name “Cheon Bo” in South Korea, as well as in England, France, Germany and Argentina.

His artwork, such as Destiny, won plaudits from people around the world. At the 2011 Arteclásica Art Fair held in Argentina, through Destiny, he portrayed the destiny of the weak before the strong through painting and said, “I received the design from the Holy Son Jesus and He showed me a vision through inspiration, so I drew it swiftly in an instant without being able to breathe.” (News Kyungnam)

“Worldwide renowned, Choen Bo stands out among the artists of his delegation who show their paintings in Arteclásica 2011.” Clarin news reported. (ref | archived) Terra news also announced that the work of the South Korean Choen Bo was among the the 15 finalists of the second edition of the Great Prize of Painting Center Costa Salguero, chosen from 350 participants. (ref | archived)

Additionally, Jung was chosen by the organizing committee from among 3000 other artists from around the World as the ‘Representative Artist’ of the exhibition, while Destiny was selected as the representative artwork at the Arteclásica 2011. Reporters from 4 television news stations, including Argentina’s “Canal A”, came to interview Pastor Jung about his life and artwork, and the interview was aired nation-wide. Additionally, Pastor Jung’s artworks also received overwhelming publicity through newspapers, magazines, and other media. (ref | ref 2)

Jung is an artist who goes beyond mimicking certain models. He has been freely creating his own world of new art. Yet, there is no disorder to be found within that freedom; the reason being, instead of portraying imperfect human beings or a distorted world caused by mankind’s ignorance and errors, he endeavors to shape his images using the freedom found within the truth and within the ideal world which our Creator governs. [News Kyong Nam]

The objects that appear in his drawings are mountains, seas, the sun, birds, trees, and rocks: things we can commonly see in nature. However, the way those objects are illustrated on his canvas is not ordinary at all. The reason is that Jung is not restricted by institutionalized education or by a sensory experience that is limited to the physical body and external stimuli, but he freely receives various ideas through communing with the Divine.

In his paintings of pine trees as well, while minimizing the usage of combining various techniques as well as the addition of extra details as much as possible, Jung displays unique shapes, such as a pine tree coiling up like a dragon, a pine tree with a brawny appearance, a pine tree standing while firmly rooted to a rock, and a pine tree sitting on the top of a mountain.

In addition, his compositions of various images of palm trees boasting grand and charming appearances, of fruits after having survived the throes of the ocean and the winds of the sea, and of a weak snail defying a stork that is infinitely stronger suggest many significant meanings. In these artworks, Jung’s twists and turns that he went through in his life, his breath of struggle for the beauty of perfection, and his shouts of victory permeate throughout his artwork intact with his guidelines for life.

Also, there is a series of Chinese ink wash drawings that Jung has drawn. On these drawings, Jung paints rocky cliffs that are surrounded by the sea, an evergreen tree that is rooted on one of the rocky cliffs, seagulls flying over in the sky, the crimson sun rising, and people who are racing while riding on a boat on one canvas. Those drawings are his great masterpieces that eliminate the distance between mountains and seas, Heaven and Earth, and God and human beings, and literally actualizes the beauty of perfection called harmony.

In such works of art, the chronological flow of history and the endlessness of time that can change a human being’s life are inherent. Furthermore, the curves of each of his lines drawn with one brushstroke vivify the sense of rhythm found in nature, which increases the musicality of his artwork and amplifies its vitality.

In addition, Jung’s desire to harmonize items of different nature led him to adopt calligraphy as one of the elements of his paintings. This applies when he pictorializes his signature into an object or when he couples his drawings with poetry containing his ideologies. His experimental spirit, which boldly tears down the walls of genre and strives towards aesthetic unity, has given birth to artwork of superiority.

Jung has established God’s majestic world of creation as the target for his paintings and has expressed it wondrously and beautifully using his spiritually keen eyes to see the beauty in the world of the Divine. Above all things, his artwork has the power to move one’s soul. It allows us to face God and opens the pathway for us to search for the purpose of life so that we can gain eternal life. That’s why those who see his artwork respond to his teachings.

As a religious leader, Jung has adopted art. Drawing art that takes responsibility for life is a great task, and living his life in order to reach the pinnacle of art is a tremendously valuable and beautiful task.

His world of art is coherent with this Bible verse: “The truth will set you free.” (John 8:32) His artwork represents his communion with God and a mentality that has reached its peak with God. (news kyongnam reference | archive |  translated reference)